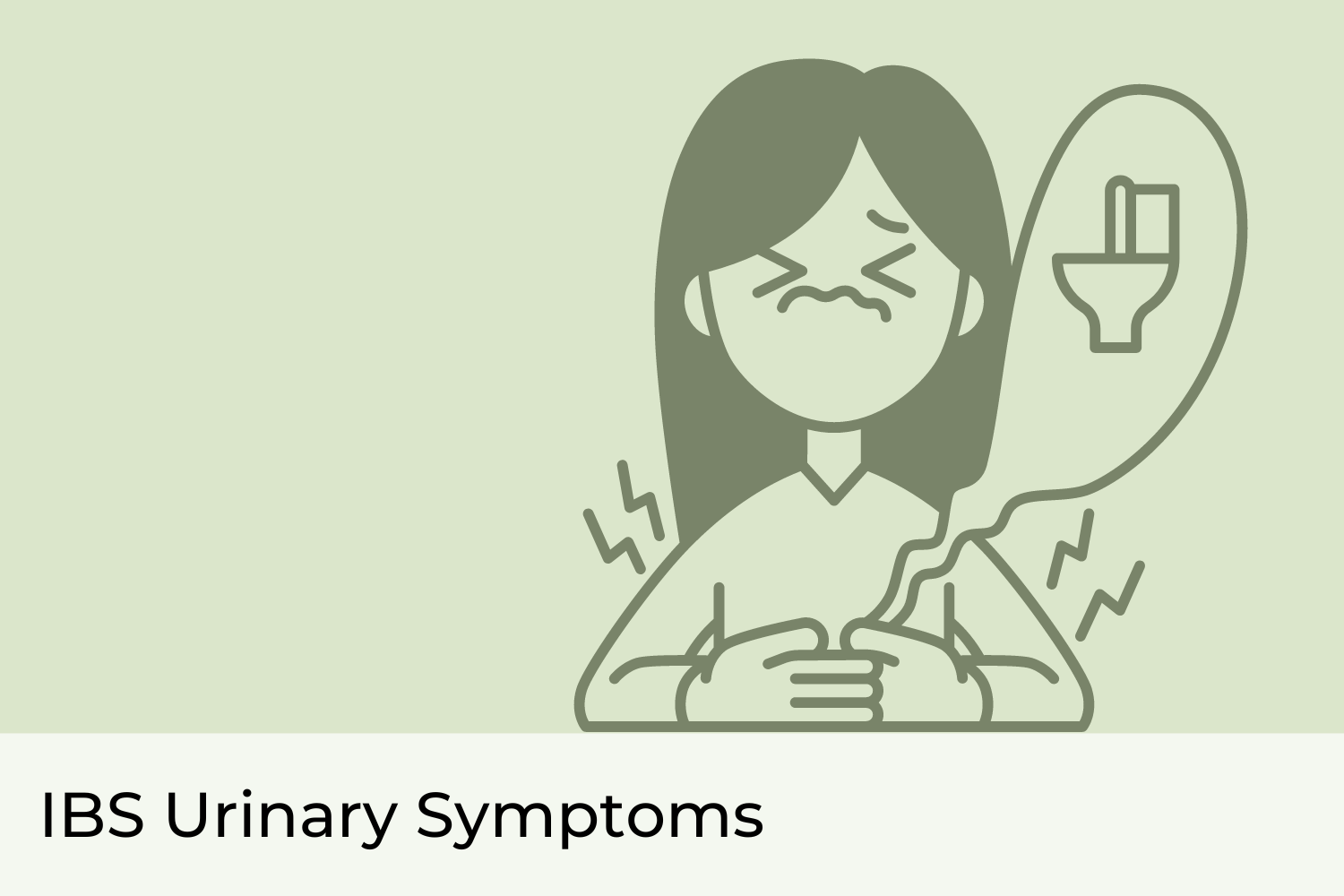 Irritable bowel syndrome (IBS) is a condition that affects the digestive system of millions of people around the globe. It is a long-term condition that causes recurring pain or discomfort in the abdomen and altered bowel habits. Although it can appear at any age, the first symptoms usually appear in the early stages of adulthood for most people. Women are more likely than men to get IBS and have more severe symptoms. Symptoms of IBS may also include changes in urinary habits, such as increased frequency or urgency of urination, or difficulty fully emptying the bladder along with stomach cramps, bloating, and constipation that can come and go for days or weeks at a time.

There is no known cause or cure for IBS but there are things individuals living with it can do to manage their condition better such as changes in diet/lifestyle choices and medications if needed.

What are IBS Urinary symptoms?

The symptoms of constantly needing to urinate for irritable bowel syndrome with urinary symptoms may include:

Irritable bowel syndrome with urinary symptoms (IBS-U) can cause several symptoms, including:

Feeling that the bladder is not fully empty

The symptoms of feeling that the bladder is not fully empty with IBS include:

The symptoms of urinary incontinence in IBS with urinary symptoms include:

The symptoms of IBS with urinary symptoms include:

Changes in bladder habits associated with irritable bowel syndrome with urinary symptoms include:

The underlying cause of irritable bowel syndrome with urinary symptoms is believed to be the presence of inflammation in the gastrointestinal tract. This inflammation can lead to changes in how signals are transmitted between the brain and bladder, causing problems with coordination between these organs.

Additionally, there may be increased sensitivity in nerve endings within the bladder itself, which results in heightened pain sensations during urination. Furthermore, some people may experience constipation as a result of taking anticholinergic medications used for treatment purposes – this can further exacerbate existing issues by slowing down digestion and reducing blood flow through the digestive system.

Symptoms of irritable bowel syndrome with pelvic pain include abdominal pain, constipation, diarrhea, gas and bloating, nausea and vomiting, fatigue, and low energy levels. The condition may also cause sexual dysfunction such as decreased libido or difficulty achieving orgasm. Other common symptoms include headaches or migraines, back pain, anxiety, or depression.

The symptoms of worsening menstrual symptoms in an IBS patient include abdominal pain, bloating, constipation or diarrhea, nausea and vomiting, difficulty eating or swallowing due to stomach pain and nausea, fatigue, and exhaustion.

Additionally, many women with IBS report a worsening of their IBS symptoms during certain phases of the menstrual cycle. Hormonal fluctuations may play a role in this symptom exacerbation.

For someone with IBS, pain during sex can be described as sharp or burning. It is most likely to occur during deep penetration and can make intercourse difficult or impossible. The pain may also extend beyond the pelvic area and into the lower back or abdomen. Sexual dysfunction in people with IBS includes a lack of desire and difficulty getting aroused, which can lead to insufficient lubrication in women and further increase the likelihood of pain during sex.

Bloating is a common symptom of irritable bowel syndrome (IBS) that can cause an individual to feel tightness in their upper abdomen, get full faster after eating, and experience increased gas production and flatulence.

The following are some other symptoms of bloating in women with IBS: discomfort or pain in the lower abdomen, feeling full quickly after eating, nausea or vomiting, burping or belching frequently, abdominal distention (increased size of the stomach area), difficulty swallowing food or liquids.

Causes of IBS with urinary symptoms

Irritable bowel syndrome (IBS) is a chronic illness that results in irregular bowel movements and recurrent abdominal pain or discomfort. Although it can appear at any age, the first symptoms usually appear in the early stages of adulthood for most people.

In addition to having more severe symptoms than males, women are more prone to get IBS. The causes of digestive disorders in irritable bowel syndrome with urinary symptoms include IBS itself as well as other possible underlying conditions such as endometriosis, Crohn’s disease, ulcerative colitis, and constipation or diarrhea due to dietary changes or medications used for the treatment of these conditions.

Inflammatory bowel disease (IBD) is a group of chronic conditions that affect the gastrointestinal (GI) tract. It is characterized by persistent inflammation of the intestines, which can lead to pain, discomfort, and changes in bowel habits such as diarrhea or constipation.

Irritable bowel syndrome (IBS) is a disorder characterized by abdominal pain and altered bowel habits, including diarrhea and constipation. IBS often coexists with other GI conditions such as Crohn’s disease or ulcerative colitis, both of which are forms of IBD. The cause of IBD is unknown; however it may be related to genetics, environmental factors such as stress or diet changes, immune system dysfunction, and gut microbiome imbalances.

This inflammation can cause the walls between the organs in the GI tract to break down causing pain symptoms in those areas along with impaired digestion leading to poor absorption of nutrients from food sources resulting in malnutrition among other side effects like fatigue or joint pain. Meanwhile, irritable bowel syndrome with urinary symptoms may occur due to increased pressure on the bladder due to abdominal discomfort caused by inflammatory bowel disease.

Chronic pain syndromes that can cause irritable bowel syndrome with urinary symptoms include:

5. Intestinally Induced Urinary Symptoms: IBS can also lead to lower urinary tract symptoms such as increased urination frequency, urgency and nocturia. This is due to the fact that irritable bowel syndrome can affect the functioning of the autonomic nervous system which controls involuntary functions such as digestion and bladder function. Therefore, people with IBS are more likely to experience intestinal-induced urinary symptoms than those without it.

6. Abnormal Gut Sensitivity: Irritable bowel syndrome is a digestive disorder that can cause abdominal pain, diarrhea, and/or constipation. According to the theory of abnormal gut sensitivity, there is a miscommunication between the nerves in the brain and the gut which may lead to overreaction to various aspects of digestion.

This results in symptoms such as pain, diarrhea or constipation when digesting any type of food. Additionally, it may cause an overly sensitive response to gas or just passing poop. (PS, you may download a poop tracking app here.)

7. Bladder Sensitivity: The relationship between bladder sensitivity and irritable bowel syndrome is a cause-and-effect one. Studies have shown that there is significant hypersensitivity of mechanosensitive bladder afferents and alterations in the excitation and channel properties of bladder-innervating DRG neurons both during and following colitis.

Furthermore, there is ample evidence to suggest that alterations in neuronal sensitivity underlie symptoms associated with OAB or IC/PBS; therefore it is possible to exploit these neuronal pathways for treatment purposes.

8. Interactions Between the Gut and the Brain

9. Bladder Muscle Dysfunction: Bladder muscle dysfunction (BMMD) is a condition where the muscles that control bladder and bowel function do not work properly. It can lead to a variety of urinary tract conditions, such as interstitial cystitis (IC), pelvic floor dysfunction, urge incontinence, overactive bladder (OAB), chronic prostatitis and other related conditions.

The relationship between irritable bowel syndrome (IBS) and bladder muscle dysfunction is well established. Studies have shown that women with IBS are over 33% more likely to develop overactive bladder than those without IBS symptoms. Additionally, many IBS patients report experiencing urinary symptoms such as incomplete bladder emptying, frequent urination and nocturia (urinating at night).

Scientists believe that the close proximity of the nerves and muscles of the bowel and bladder may contribute to this link between BMMD and IBS with urinary symptoms due to their interaction on some level.

For example, a patient with IBS with urinary symptoms may benefit from avoiding foods that increase urine production such as caffeine-containing beverages or foods high in sodium. They could also consume more fluids throughout the day to help prevent dehydration due to increased urination associated with their condition. Learn more about diets for IBS here.

Medications available for irritable bowel syndrome with urinary symptoms include anticholinergic medications, such as oxybutynin (Ditropan), tolterodine (Detrol), and trospium (Sanctura). Other drugs may include tricyclic antidepressants, selective serotonin reuptake inhibitors (SSRIs), and immune system modulators such as prednisone. Additionally, doctors may recommend lifestyle changes such as giving up smoking, losing weight, exercising regularly, and following a diet that restricts caffeine intake and acidic foods.

Bladder retraining can also be beneficial in some cases by encouraging patients to urinate at regular intervals. Finally, pelvic floor muscle training may be used to strengthen the muscles around the bladder area which can help reduce symptoms of urgency or incontinence associated with irritable bowel syndrome with urinary symptoms.

There are a variety of physical therapy treatments available for irritable bowel syndrome with urinary symptoms. These include: Manual therapy or massage:

Manual therapy takes time and patience and may require one to three sessions per week, depending on the technique used and the patient’s response to treatment. Internal massage can also help release nerves.

Deep tissue massage (myofascial release): This type of massage focuses on releasing tight spots or “knots” within muscles by applying pressure directly onto them while stretching them outwards.

Trigger point therapy (for nerve release): This technique aims to reduce pain by locating areas where nerves are becoming irritated or inflamed and then applying pressure directly onto these points in order to relieve the discomfort they cause in surrounding areas. Joint mobilization:

Joint mobilization involves moving joints through their full range of motion while supporting them with pillows or towels in order to decrease stiffness caused by IC/BPS.

CBT focuses on changing thought patterns and behaviors in order to improve symptoms. It helps patients identify the factors that contribute to their pain, such as stress, anxiety, or negative thoughts about their condition. Then they can work together with their therapist to develop strategies for coping with these factors better.

MBSR is a type of meditation that helps reduce stress levels by focusing on the present moment instead of worrying about the past or future events. By practicing mindfulness exercises such as yoga or deep breathing regularly, patients can learn how to remain in control of their emotions when faced with difficult situations related to their condition.

Various relaxation techniques are available to help relieve stress and anxiety. These include:

The benefits of probiotics for irritable bowel syndrome with urinary symptoms include:

Anti-inflammatory drugs for the treatment of irritable bowel syndrome with urinary symptoms include:

There are several types of surgeries that are available:

Irritable Bowel Syndrome with urinary symptoms can be managed through a few different methods. Cognitive Behaviour Therapy and Mindfulness-Based Stress Reduction focus on changing thought patterns and behaviors, while relaxation techniques such as counseling therapy, warm baths, stretching or yoga help reduce stress levels. Probiotics balance the gut flora and reduce inflammation in the digestive system, while anti-inflammatory drugs and surgery can help address more severe cases. To keep track of IBS symptoms, it is helpful to use a symptom tracker such as CareClinic, you can download it for free here. With the help of you health care provider, you can slowly work towards better outcomes!

Latest posts by Alexandra V. (see all)
GET THE FREE APP