ADHD is an abbreviation for attention deficit hyperactivity disorder, which is a neurodevelopmental condition that affects mostly children and adolescents. The mental disorder can cause one to have difficulties when it comes to paying attention, being combined with inappropriate behavior (age-wise) and a state of permanent agitation. One might also have difficulties regulating his/her emotions, this is why it is important how to manage ADHD or ADD quickly.

In general, the first signs of ADHD manifest themselves in small children, affecting their academic performance, home life, and various recreational activities. This condition is encountered in association with other mental health problems (autism, learning & intellectual disabilities, anxiety) and substance abuse, especially in teenagers.

According to the latest statistics, there are over 50 million people worldwide suffering from ADHD. From the people who receive this diagnostic during childhood, between 30 and 50% will continue to present similar manifestations as adults. The good news is that ADHD is a condition that can be successfully kept under control through adequate management. (R)

How does ADHD manifest itself?

The manifestations of ADHD fall into two categories – the first regards the lack of attention and the second one refers to the hyperactive & impulsive behavior. (R)

A person who suffers from ADHD might have difficulties paying attention to details or staying concentrated on a particular task. They will also be unable to organize a task/activity, losing or forgetting things. The attention span is considerably limited, with the slightest thing distracting them. They cannot follow a structure or complete a task that requires time & effort.

The person in question might have difficulties standing still, finding reasons to move or engaging in inappropriate behaviors. They always seem as if they are filled with energy, seeking out trouble or a new source of stimulation. With no regard for consequences, they will interrupt other people or engage in risky behaviors.

What are the causes of ADHD?

In the majority of the cases, the causes of ADHD are not known. According to the latest research, scientists have incriminated a combination of factors (environmental, social, and genetic).

Is ADHD hereditary? The answer is yes. The condition can be inherited from one of the parents. Moreover, if a sibling already has the disorder, there are high changes that any new children in that family will suffer from that condition as well. The genetic predisposition has also been associated with ADHD that is present from childhood age to the one of adulthood.

Both alcoholism and smoking during pregnancy are associated with a higher risk of ADHD in the respective newborn. Babies who are born prematurely or with a low weight can develop such problems, as well as those who are isolated (from a social point of view) or suffer various infections. The diet is not considered a cause per say but it can make the manifestations of ADHD worse.

Children who have been exposed to abuse of any kind, living in a dysfunctional family, might develop ADHD. This condition is also seen in children with a reduced level of education, or in those who have been constantly pressured by their parents to excel from an academic point of view. (R)

How is ADHD diagnosed?

In managing ADHD, a neurodevelopmental specialist will assess the child’s development, both with regard to his/her behavior and mental health. The main idea is to rule out other conditions or treatments that might contribute to the ADHD-like manifestations.

The DSM V ADHD criteria (DSM 5) are used for this diagnosis, guiding the specialist towards the diagnosis of a disruptive behavior disorder. The specialist must take into account co-existing disorders, such as depression, anxiety or autism spectrum disorders. Additional investigations, such as EEG, might be used. The adult ADHD self-report scale might be useful for the diagnosis of this condition in people of adult age.

How do you get tested for ADHD?

If you are interested in this subject, you should locate a therapist that specializes in the diagnosis of ADHD. You will go through a thorough assessment of your development and suspected issues, and you might be given a self-report scale to complete as well. There are no actual physical tests at the moment that can be used for this diagnosis. (R)

Manage ADHD with the CareClinic App 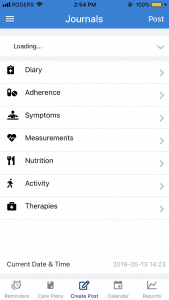 When it comes to ADHD treatment options, the list generally includes various types of behavioral therapies (in the form of counseling) and medication. Depending on the age, the severity of the condition and co-existent conditions, the therapist might decide to use either one of the two, or both. (R)

A number of behavioral therapies are recommended for those who have been diagnosed with ADHD, especially those that exhibit less severe symptoms and are young in age. If you are interested in ADHD treatment without medication, you might consider cognitive behavioral therapy, family therapy or neurofeedback (just to name a few).

During therapy, one might work on improving the ability to concentrate and pay attention to details, as well as on reducing or eliminating hyperactive & impulsive behaviors. In case of children, parent training might be necessary as well, in order to reduce behavioral issues. For example, children who are non-compliant or oppositional might benefit from cognitive behavioral therapy.

The therapist might decide that the training of social skills is necessary as well, as many of the people with ADHD have difficulties in this area. One will be encouraged to develop friendships with people who do not have this condition, as this can eliminate the risk of problems at a later age (such as engaging in criminal behavior or turning towards substance abuse).

Medication Options for those with ADHD

The stimulant medication represents the standard choice for short-term uses, contributing to an improvement of existent manifestations in the majority of the cases. One of the most often recommended drugs belonging to this category is Ritalin (methylphenidate), which stimulates the central nervous system and improves the neurotransmitters’ action in the brain. The drug can reduce the tendency towards risky behaviors and, thus, the risk of associated injuries. Common side-effects include sleepiness, anxiety and weight loss.

The non-stimulant ADHD medication, as opposed to the stimulant category, does not improve academic performance. Straterra (amoxetine) is one of the non-stimulant drugs and a norepinephrine reuptake inhibitor, which is recommended to children over the age of six. Wellbutrin/Zyban (Bupropion) is another drug that targets not only ADHD manifestations but also depression (it is also a norepinephrine reuptake inhibitor).

A less preferred choice is Tenex (guanfacine), which brings down the activity of the sympathetic nervous system. Catapres (Clonidine), another non-stimulant medication, should be administered with caution – when stopped abruptly, it can lead to symptoms of withdrawal.

According to modern guidelines, when it comes to children, the medication should be reserved only for severe cases. For adults, on the other hand, it represents the first choice whereas treatment is concerned. Therapists and doctors should explain not only side effects but also contraindications of ADHD medication. Moreover, both children and adults should be carefully monitored throughout the entire treatment period.

When stimulant medication is administered for long periods of time, at a dose that exceeds the recommended guidelines, there is the risk of addiction and/or dependence. This type of medication should be an option only on a short term basis. ADHD should not be left untreated, due to the high risk of substance abuse and misconduct. (R)

Michael Phelps, the world-renowned swimming champion, is one of the many famous people with ADHD and a living proof that physical activity can change your life for the better. Physical exercise, whether in the form of swimming, aerobics or other sports, can improve one’s behavior and help with attention, planning and self-esteem. There are countless other celebrities that have been diagnosed with ADHD and it should not be seen as a taboo diagnosis.

It has been determined that physical activity is beneficial for those with ADHD, and especially for those battling the associated depression and anxiety. You might have heard about the ADHD dopamine connection – people who have this condition suffer from a reduced level of dopamine and other similar substances in their brain. Physical exercise can help, stimulating the brain to produce and release happiness hormones that will improve one’s behavior. (R)

Diet for those with ADHD Symptoms

It has been determined that children diagnosed with ADHD might benefit from certain dietary changes. The recommendation is to eliminate foods that contain preservatives, artificial food coloring, and other potentially harmful substances. Moreover, the manifestations of ADHD might improve upon children being administered supplements containing fatty acids. It is also advised that the patient get tests done any sort of infection or inflammation that could be causing cognitive impairment. Additional tests include checking for food sensitivities to things such as gluten and reducing sugar intake.

In making the dietary changes, one should consider any existent nutritional deficiencies (iron, iodine, magnesium). These can influence ADHD manifestations and they can be resolved either through the diet or through nutritional supplements. If you would like to look into alternatives, you may research drugs which are not amphetamines (non-stimulant) such as Piracetam, keep in mind the FDA has not approved this for the treatment of ADHD and you will not be able to buy this in the United States. (R)

Apps to Manage ADHD for Android, iPhone or Web

If you are interested in managing ADD, either for yourself or a member of your family, you can trust CareClinic’s health app for this purpose. The application is free and available on different smartphone platforms, and there is also a web version that can be used.

Within the application, you will find an online diary that can be used to track the different symptoms and manifestations of ADHD. The application allows you to stay organized, keeping track of different therapies, medication plans, and other health-related information. You can use it to set up reminders for medication intake and doctor/therapy appointments, thus ensuring the necessary adherence.

At the end of each month, you will be given a report, which can be used to assess your progress. The doctor or therapist can greatly benefit from this information, relying on the recorded data to adjust your treatment plan accordingly. For teenagers or adults, the application can serve as a personal diary, allowing you to record emotions, feelings, and thoughts about life with ADHD. Thus, it serves as an excellent tool for emotional release.

The application is constantly improved by a team of specialists so that it permits the effective management of a complex condition such as ADHD. It is a useful tool for children and parents alike, with a user-friendly interface.

You can trust it to monitor the behavior of your child and see how frequent his/her ADHD manifestations are. Last, but not least, it offers a simple way to keep track of every medication or therapy recommended To get started managing ADHD with CareClinic, begin by signing up for free by clicking here.

Latest posts by Alexandra V. (see all)
GET THE FREE APP